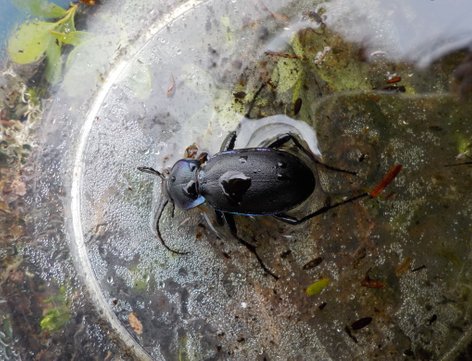 Richness of spiders and beetles in glacier forelands

Glacier retreat around Jostedalsbreen provides new areas for animals to colonize. A new study found 40 spider species and 70 beetle species in the foreland of Austerdalsbreen. A comparison to a previous survey shows a high degree of taxonomic replacement as the terrain ages.

Glaciers thin and retreat all over the world due to climate warming. This exposes new land in front of glaciers, ready for cold-adapted plants and arthropods to colonize. Some of the first colonizers are spiders and beetles, but as the terrain ages the pioneering species are outcompeted by other species.

A new study by Christian Klopsch and colleagues, published in The Holocene, reveals that the glacier foreland at Austerdalsbreen is much more enriched in spider and beetle species than previously known. The study was conducted in 2019 and was compared with a similar survey of spiders and beetles at Austerdalsbreen in 2004. The study provides an update to the taxonomic makeup of three distinct stages of colonization for spiders and beetles: a pioneer stage, an intermediate succession stage, and a late colonizer stage. The late and intermediate colonizers seem to have moved into younger terrain while the pioneer specialists are restricted to an occurrence close to the glacier margin.